Gallagher’s signature sketch is a pitch for the “Sledge-O-Matic,” a large wooden mallet that he uses to smash a variety of food items and other objects, culminating with a watermelon. 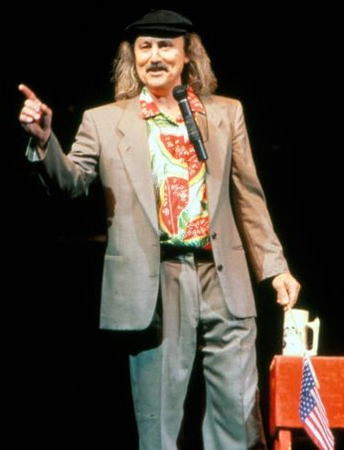 Sure, he’s the famous watermelon smasher. Yes, he literally INVENTED the television stand-up comedy special. Absolutely, 14 Showtime specials is a big deal. And certainly 3,500 live shows to capacity crowds is worth mentioning. 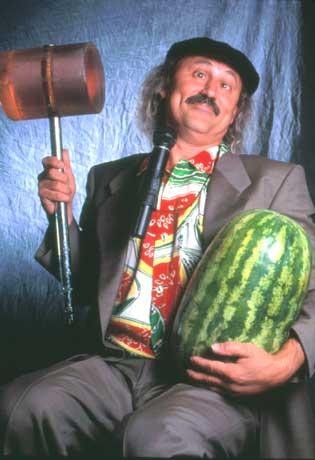 But how about that he is the reason they invented Comedy Central? Or that before him no one ever had that level of interaction with a live audience? Or that he was the #1 comedian (in ticket sales and ratings) for almost 15 years?
Gallagher has led an extraordinary life, with an even more spectacular career. His fan base is one of the most loyal there is, and he rewards them every chance he gets. Now on the Jokes on you tour!
World-Famous comedian Gallagher became a household name by smashing watermelons during his highly rated HBO specials. But millions of comedy fans around the world were already in love with his razor-sharp observations, hilarious dead-on insights, and incredibly creative word play. One need only see that he has joined the exalted pantheon of the ``one-name-only`` celebrities (such as Oprah, Madonna, and ``The Donald``) to know how beloved Gallagher's comedy is. With a following built upon countless sold-out concert halls, uproarious HBO specials, and bestselling CDs, videos, and DVDs, Gallagher's immense talent and broad appeal make him a ``first ballot`` Hall of Fame comedian. Gallagher is not coasting nor is he slowing down, however! To the delight of audiences across America, Gallagher is still making us fall out of our chairs with laughter. Gallagher has the distinction of being the first real star to come out of cable television. To date he has done sixteen specials: Uncensored Evening, Mad as Hell, Too Real, Totally New, That's Stupid, Stuck in the 60's, The Maddest, Melon Crazy, The Bookkeeper, Over Your Head, The Messiest of Overboard, The Leap Year Marathon, We Need a Hero, Smashing Cheeseheads and the most recent Sledge-O-Matic.com. The Sledge-O-Matic DVD collection is available on EBay and Amazon.com, and you can purchase VHS tapes, 2-Bak caps, ponchos, and additional fan gear on Gallagher's website at www.gallaghersmash.com. A Gallagher concert